I get into a lot of arguments with my parents and majority of them end like this:

“You’re so young and inexperienced, blah blah, wait until you’re grown up.” or,

Last week, I lost my parking bay to another tenant. No biggie because there’s parking off street. But no, my parents decided to go and make a “reserved” sign and plonk it on the lawn in front of an unreserved bay. (The complex has a few unreserved bays which work on a first come first serve basis.)

Now I have this useless piece of wood/metal sitting arbly in the corridor. 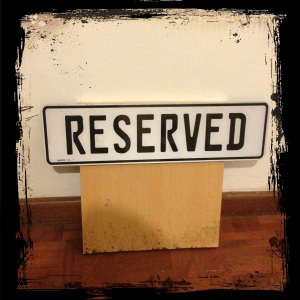